I received email that tells Plink shut down. Nothing lasts forever, but my concern (probably all Plink users’ concern) is what happens to points we had. I sent email about it, and I received the following message in a second.

Thank you for contacting Plink. We are sorry, but no more points can be redeemed.

Plink was officially closed on Sept 11, 2014. Unfortunately, no staff remains to answer emails.

It seems that it is an automated email. I’m very disappointed. The last email and their current website say “Any further questions can be directed to support@plink.com. “, but they had no intention to give a costumer support. All they did was set up an automated answering email. 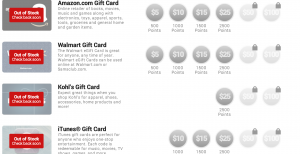 I was a new member of Plink. I had 4900 points when they shut down, and that was my lifetime points. I had never redeemed the points. I wanted to see what would happen when I earned more than 5000 points and how many points they needed for $50 or $100 gift cards. I was expecting that I could get some discount such as 4750 points for $50 gift card, but when my points reached 4900, $50 gift card stayed unlocked (not redeemable). So, at this time I learned there was no discount. It might have had, but it would have been less than 100 points ($1). It was not much worth, so I decided that I would redeem the point when my points got over 5000.

As I said earlier, nothing lasts forever. But when things went bad, they could have done something such as sending a notice, instead of shutting down all of a sudden. What I’m angry about is that they were offering a promotion in the last minutes!

At least, it gives me a lesson. It is better to redeem off as soon as it gets available in case of a sudden closure. Starting with a similar program, ShopKick, you can redeem for a gift card in as little as $2 increment.

And Chime Card, (it is totally different reward program.) The new rule will be implemented on Oct 8th. They will probably start charging a fee to load Chime with PayPal debit card. I have been using the card without a problem, but new offers haven’t been added this week. What is going to happened to this program?