Now, I can load money up to $1500. I took AmEx GC and Visa GC to Target and planned to make two reloads with them. First, I went to the customer service. I told the clerk that I wanted to load $500 to the temp card. She swiped my temp card on a register that is facing to them. Then a PIN pad that is facing to customers says, “Slide your card.” I did it with AmEx GC. After I had signed on a PIN pad, the clerk asked me to hand her the AmEx GC. Then she typed something on the register (probably the last four digits of the card.) Nothing else can check, anyway. There is no name on AmEx GC, and there is no name on the temp card, either.

She gave me back both cards with a receipt of reload. My first reload to Redbird was done successfully. It was very smooth. I was worried if they don’t know how to load or refuse to load. Because in the state I live (NY), Redbird hasn’t been available for purchase yet.

This was what I had never expected. I assumed that I could have it loaded at any cash registers as well as the customer service just like at Walmart for Serve reload. I thought back a little while and tried to remember what blog posts and forums said. None of them mentioned about such a thing. So, I guessed that the cashier didn’t know how to reload or that the store instructed cashiers to send customers to the customer service for reload. To make sure of it, I went to the next Target store which was only a mile away.

At the next store, I went to the customer service first because I wanted to make sure that I could use Visa GCs for reload. I brought two $200 Visa GCs which I had bought at Best Buy. This time, I asked a store clerk to load $400 and make a payment split into two. The process was the same as the previous one until I swiped the first card (Visa GC.) A display of PIN pad prompted to enter PIN, but the clerk told me to press “Cancel”, which is a red button at the bottom left corner of PIN pad. And then a display (touch screen) showed “Debit” and “Credit.” I was told to press “Credit” and signed. I did the same for the next card.

It’s very impressive. These two reloads were made with GCs, and they were used like credit cards. But, Target’s POS system recognizes the cards as prepaid GCs and even shows the remaining balance of GCs on the receipts. It is very useful when you have Visa, MasterCard, or AmEx GCs that have a small amount. I receive a lot of GCs as forms of rebate from Staples, Newegg, TigerDirect, etc. They usually have small amounts, and many of them are not whole numbers. (often, $7.99, $86, etc.)

In that store, I made a small purchase with the temp card and then asked to load at the cash register. This time, I successfully had it reloaded. I used one $200 Visa GC and entered PIN (used as debit card.) Here is the receipt (on the left.) As you see, it doesn’t show the balance of GC. 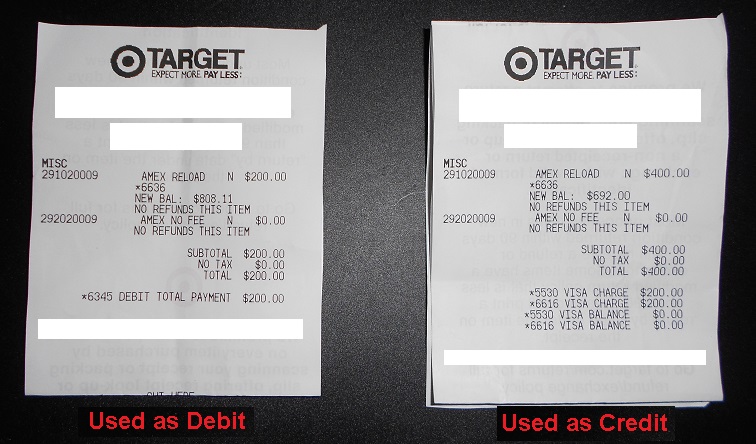 When you use Visa or MasterCard GCs like credit card for reload by split payment, Target’s POS knows the amount of GCs. So, maybe I don’t have to tell the cashier the remaining balance of GCs. I wonder if it automatically drains the remaining balance and up to how many cards Target allows in a single transaction. I will find out later.

One thought on “Loading A Temporary Target Prepaid REDcard”